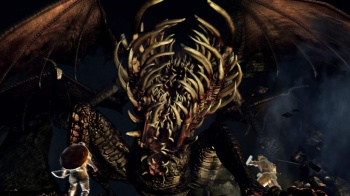 The aptly named Prepare to Die edition of Dark Souls will arrive for PC this summer, presumably slaughtering everything in its path.

PC gamers love hard games, right? While the majority of people playing games on PCs are actually occupying their time with Bejeweled and FarmVille, there is still a dedicated community of stalwarts who balk at the notion of games that can be completed without an instruction manual the size of a small dog. This August, though, Namco Bandai will take the hardcore PC community under a leathery, demonic wing when it publishes Dark Souls: Prepare to Die Edition. The popular PS3 and Xbox 360 title, known for its punishing difficulty and cohesive world-building, will arrive with improved PVP capabilities, a new area to explore, and lots of new monsters to gawk at before they tear you to pieces with teeth, claws, poison, and whatever else they have handy.

Considering the PC crowd's predilection for tough titles (Dwarf Fortress, anyone?), Dark Souls seems like a natural fit. If its subtitle is to be believed, Prepare to Die's new content will give them a challenge worthy of their skills. PVP enhancements will allow players to tailor more elaborate battles against one another, and the new "Artorias of the Abyss" content will pit players against fearsome new foes in unexplored terrain. At present, it looks like a dragon and a manticore will eagerly take a bite out of would-be adventurers, but rest assured that other enemies, gargantuan bosses, and unfriendly environments will take you out long before you can reach them, you Zynga-coddled milksop.

Dark Souls: Prepare to Die will launch around the world on August 24 in both digital and retail form, which should give PC gamers lots of time to cut their teeth on The Witcher 2 and prepare arguments for why Dark Souls will never be as hardcore as the X series (with the exception of that mollycoddling X3). If you choose not to buy the game, that's all right, too. We'll understand if you're too afraid.