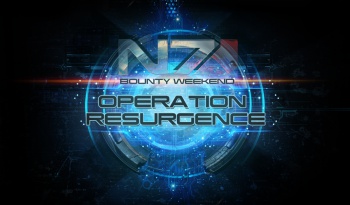 If you've been hard at work churning out level twenty death machines for Mass Effect 3's cooperative mode on either Xbox 360 or PC, then perhaps you've been taking a few things for granted without even knowing it. Did you know, for example, that your friends who purchased the game for PlayStation 3 have never been offered a promotional weekend? You know, those two-day community exercises that grant bonus XP and free super content packs worth 240 MS Points or more? According to EA, it's not trying to discriminate against people who play on PS3, but Sony simply won't approve Mass Effect promotional weekends for users of its console.

"Unfortunately, we are not yet able to offer our Multiplayer Challenge weekends on PlayStation 3," said EA community manager Eduardo Vasoncellos. "Sony has not yet approved the promotion."

PS3 users have already missed out on numerous events, and soon, they can add one more to the list: Operation Resurgence, set to run from Friday, April 13th at 5PM PST to Monday, April 16th 5AM PST. Anyone who takes part will receive a 10% XP bonus any time they play on one of the Resurgence DLC's two new maps, as well as a free "Reserves Pack," which is guaranteed to unlock one of the new alien classes just released. If you're playing on PS3, you'll just have to unlock them through the traditional grind. Sorry, guys!

To date, Sony has declined to comment on its delay in approving Mass Effect's online promotions, and has released no information on when or if it will allow them on PSN in the future.