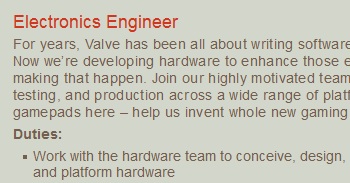 Valve may have some kind of secret hardware plan up its sleeve after all.

Back in March, rumors crawled up from the deep about some kind of "Steam Box" console-type thing Valve was secretly working on, a Core i7 rig with 8GB RAM, an Nvidia GPU and the ability to run multiple online gaming services. Those of us who found the whole thing rather dubious pointed out that it sounded very much like Valve was trying to invent the PC, but a job posting for an electrical engineer suggests that there might be something going on behind the scenes after all.

"For years, Valve has been all about writing software that provides great gameplay experiences. Now we're developing hardware to enhance those experiences, and you can be a key part of making that happen," it says. "Join our highly motivated team that's doing hardware design, prototyping, testing, and production across a wide range of platforms. We're not talking about me-too mice and gamepads here - help us invent whole new gaming experiences."

Boom! Valve console, right? Well, no. You're not necessarily building a car just because you need to hire a mechanic and in fact, Doug Lombardi's original denial of a Valve console still holds water. "We're prepping the Steam Big Picture Mode UI and getting ready to ship that, so we're building boxes to test that on," he said at the time. "We're also doing a bunch of different experiments with biometric feedback and stuff like that, which we've talked about a fair amount."

Which doesn't mean that Valve doesn't have something very cool in the works, but a full-blown, brand-new console? My dubiosity remains.