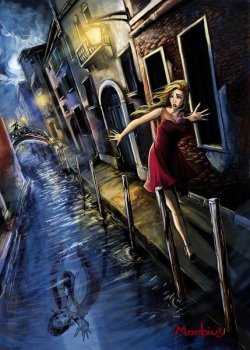 Earlier this month, Jane Jensen of Gabriel Knight fame hopped aboard the Kickstarter train with Pinkterton Road, an indie game studio built around what she calls "Community Supported Gaming." Instead of kicking in money for a specific game, supporters donate to the studio as a whole and are given access to a year's worth of content in return, including any games the studio produces [minimum of one per "season"] and a variety of other bonuses depending on the amount of the donation.

To kick things off, contributors were given the chance to choose Pinkerton Road's first game by way of a vote that took place this past weekend. The winner, with a whopping 61 percent of the vote, is the "metaphysical sci-fi thriller" Moebius, a "spiritual successor" to Jensen's famed Gabriel Knight series of Sierra adventure games.

In Moebius, players take on the role of Malachi Rector, an upscale antiquities dealer with the ability to sense "the soul" of an object. After his shop is destroyed in a fire, Rector is hired by millionaire Amber Dexter to investigate a series of mysterious events, beginning with the death of a beautiful, talented young woman found hanging from a bridge in Venice. As he comes to recognize the hidden significance of her life and death, Rector also realizes that Dexter and his associates are "playing with the fabric of life" in ways he never thought possible.

Moebius will be a point-and-click adventure with a "2D grahic novel look" and, as promised, will offer a Casual mode, with hints, a "hotspot revealer" and simplified interface, and a True Adventure mode for fans who prefer a more true-to-life, Jensen-esque experience. The game is planned for release around March 2013 if Pinkerton Road hits its $300,000 Kickstarter funding goal, which at the moment stands at a little over $173,000 with 32 days to go.