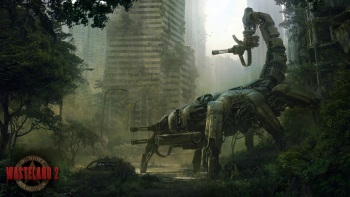 Wasteland 2 has $3 million in funding and that means big things ahead.

It was a close shave, but when the Wasteland 2 Kickstarter came to a close a couple of hours ago, the mythical $3 million mark had been hit. The Kickstarter page itself doesn't reflect that fact, registering an oh-so-painfully-close $2,933,197, but if you have a peek at Inxile's Wasteland 2 site, you'll notice that donations taken via PayPal, which were opened after the Kickstarter goal was achieve, add up to another $110,703. Grand total: $3,043,900!

It's good news for gamers because earlier this month, as the money kept piling up, Wasteland 2 mastermind Brian Fargo explained that hitting a couple of ridiculously high funding plateaus would lead to even bigger and better things for the game. Achieving $2.5 million in funding would allow for the addition of more designers and scripters, meaning a bigger, deeper game world with more storylines and player options, more NPC portraits and equipment art and an expanded music budget, he said, while $3 million would increase the scope of the game even further and also bring the possibility of a simultaneous mod kit release into the picture, which is a pretty huge deal in itself.

It was a scrape to get by, but they - and we - made it, and while pre-production began earlier this month, now the real work gets underway. The $3 million in funding means that Wasteland 2 will also be made for Linux and Mac as well as Windows PCs, and Fargo said the team will continue to put up polls in the Wasteland 2 forums to get a feel for what fans want added to the game. "The bottom line is that this kind of budget ensures that Wasteland 2 is BIGGER than Wasteland 1," he wrote.

The Wasteland 2 team is currently aiming for a release in late 2013.