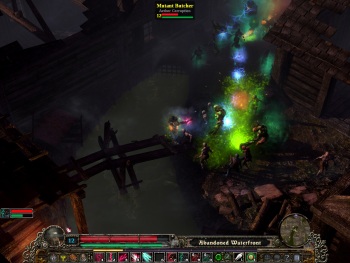 The indie action-RPG Grim Dawn has joined the crowdfunding party.

Return with me now to days long ago, which is to say February 2010, and a conversation about Grim Dawn, the action-RPG in development at Crate Entertainment, an outfit formed by a couple of veterans of the defunct Titan Quest studio Iron Lore. Long before Tim Schafer discovered Kickstarter, Crate took its own shot at "crowd contributed" game development, inviting gamers to pre-pay for Grim Dawn at one of three different levels to help ease the strain of the development process. Yet in spite of being way ahead of the crowdfunding curve, Grim Dawn hasn't actually joined in on the wild Kickstarter party - until now.

The Grim Dawn Kickstarter is now live, taking pledges of anywhere from $1 [$18 is required to actually get a copy of the game] to $8000 or more. Those who have already purchased a key need not do anything, as the first three Kickstarter tiers are identical to Crate's own crowdfunding offerings, but serious fans who want to kick in even more money can do so by simply pledging the difference between what they paid for their original key and the Kickstarter tier they're interested in. [There's a little more to it than that, obviously, so be sure to get the details on the Kickstarter thread on the Grim Dawn forum before you start throwing your money around.]

And why does a project that's been in the works for so long need Kickstarter help now? "Though we have several experienced developers working on Grim Dawn, only two of us are in a financial situation where we can afford to support ourselves without a salary (albeit on a steady diet of bread and moldy cheeses)," the devs wrote on their Kickstarter page. "The other guys involved with Grim Dawn work day jobs at other game studios to pay the bills and contribute as they can on nights and weekends. As you might imagine, this makes for pretty slow going and it is certainly not ideal for creative collaboration. When critical team members end up in crunch at their day jobs, they can sometimes get tied up for weeks, causing certain aspects of our development to temporarily grind to a halt."

Because of that, things like art, animation and world design are "falling woefully behind" the programming and gameplay development. Grim Dawn is in good shape as far as gameplay and features go, but there's just not enough actual content to support a release. "While we could still finish a fine little game on our own that would be rough around the edges but very fun, we believe there is a much greater potential that could be realized if we were more adequately funded and staffed," they continued. "So we're hoping you can help give us some proper funding so that we can get the team together, start making faster progress and ultimately release a bigger, better game."

Grim Dawn, for the record, is an action-RPG very much in the vein of Titan Quest and Diablo, but with a number of enhancements aimed at making it more appealing to the hardcore crowd. It features an open-world design with randomized elements and non-linear progression, destructible environments, customizable classes, splattertastic combat, factions, online and LAN-based multiplayer and more. Modding tools will also be included, and the whole thing will be DRM-free.

The gameplay on display in the Grim Dawn Kickstarter pitch trailer has come a long way from the pre-alpha video that was shown a couple of years ago, and even in its current state the game looks hot. Roughly $40,000 of the $280,000 funding target has been raised and there's still 31 days left on the clock. The situation seems promising, in other words - and I think I'm about to get a little bit poorer.