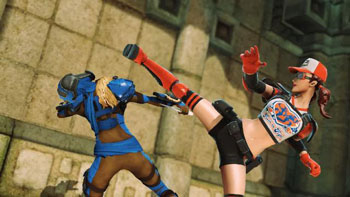 Super Monday Night Combat is available on Steam right now, but it isn't supposed to be.

Uber Entertainment's free-to-play follow-up to Monday Night Combat is technically supposed to be still in beta, but due to some technical shenanigans, the game is now available to the general public.

"We had a bunch of invite issues over the weekend and the cleanest way to sort that out is to open it up," reads a developer post on the Uber Entertainment forums. "There will be a formal announcement, promotion, etc coming soon with the next patch. Really the way we see it, it's no different that what we've been doing, which is continue to update the game."

So yeah, I guess it's now technically an open beta.

Despite sharing 76% (approximately, back off, mathematicians) of its name with its predecessor, Super Monday Night Combat plays much differently. While Monday Night Combat was pretty much just a shooter with a tower defense game tacked on, SMNC puts far more emphasis on tower building and strategy. It isn't perfect, it was still in beta for a reason, but it has a quirky sense of humor and, at the rather cheap price of free, it's difficult to fault.