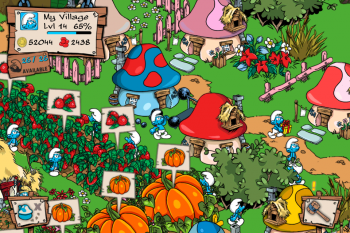 Parents concerned with their kids' in-game spending are heading to court.

After months of legal wrangling, a group of concerned parents has now been given permission to sue Apple for "manipulating" their kids into spending large amounts of real-world cash on virtual in-app objects (mostly Smurfberries) in various iOS games. Led by attorney Garen Meguerian, the group is alleging that the "addictive" nature of some iOS games drives their kids to buy in-game items without really knowing what's going on.

This isn't the first time parents have voiced concerns over in-app purchases made by their kids. After 8 year-old Madison Kay managed to run up a bill of $1400 in record time on Smurfs' Village last year, the Federal Trade Commission ruled that games like Smurfs' Village must warn parents and children that those $99 Smurfberries do cost actual, real, non-Smurf cash.

However, Apple's in-app purchase protocol has changed since then. When Madison went a little crazy for the Smurfberries, she was able to do so because all that stood between her and the berries was her mother's iTunes password. These days, kids like Madison have an extra few hoops to jump through before being able to make an autonomous purchase, including an extra, app-only password. Additionally, Apple says that iOS games featuring in-app purchases now come with an option that allows parents to switch in-game buying off altogether.

Meguerian's group of unhappy parents are seemingly unsatisfied with these updates. Even though it's now much easier to stop your kid wasting the month's food budget on new shinies for their virtual pets, the parents in question seem to believe that the option to pay real money to advance shouldn't be in the games at all. Their issue would seem to be more with the addictive, Skinner Box-y nature of these games than with the purchase structure itself.

Apple has declined to comment on the case, having already asked that it be booted from the justice system in light of the changes made to its in-app purchasing systems. Do the parents have a point? Should games which feature potentially manipulative in-game purchase systems be targeted at children? Is $99 a reasonable price for a wagon of Smurfberries? Will these kids ever know the joy of Crash Bandicoot?