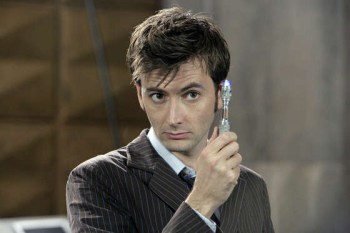 Researchers in Scotland have created a real-life version of The Doctor's most famous tool.

I've always liked The Doctor's sonic screwdriver. It's sort of a pocket-sized deus ex machina, like an oversized tire pressure gauge that the Doctor whips out when he needs to get out of a tight bind. It's a screwdriver, it's a lockpick, it's a medical scanner, it's a hacking tool; it's kind of a magic wand, really, that comes in handy whenever the writers have painted themselves into a corner, rather like a holodeck you can carry around in your hand.

But science has now taken some preliminary steps toward turning sci-fi's most famous handyman tool into a real-world device. Researchers at Dundee University in Scotland have put together a machine that uses ultrasound to lift and rotate a rubber disc floating in water. It may not sound like much but it's claimed to be the first time that ultrasonic waves have been used to turn, rather than just push, an object, and while it probably won't be popping locks anytime soon it has great potential for use in medical applications including non-invasive surgical techniques, targeted drug delivery and more precise ultrasounds.

"The sonic screwdriver device is also part of the EU-funded nanoporation project where we are already starting to push the boundaries of what ultrasound can do in terms of targeted drug delivery and targeted cellular surgery. It is an area that has great potential for developing new surgical techniques, among other applications," Dr. Mike MacDonald of the university's Institute for Medical Science and Technology told the BBC. "Like Doctor Who's own device, our sonic screwdriver is capable of much more than just spinning things around."

The results of the experiment, referred to in non-Dr. Who terms as "Mechanical evidence of the orbital angular momentum to energy ratio of vortex beams," will be published in the American Physical Society's journal Physical Review Letters.