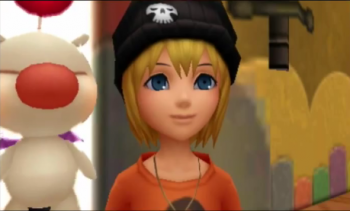 TWEWY might have more coming up than just a Kingdom Hearts cameo.

When quirky Square Enix RPG The World Ends With You debuted, it faced an even more deadly threat than the murderous Reaper Games: lukewarm sales and a marketing team more interested in pushing the latest Final Fantasy entry. While the game didn't exactly flop, Square Enix didn't rush a follow-up out the door, either. However, with a vibrant fan following and a presence in Kingdom Hearts 3D: Dream Drop Distance, a producer at Square Enix has dropped hints that the unusual IP may be getting ready for a comeback.

One of the early levels in the upcoming 3DS installment of Kingdom Hearts will see KH protagonist Sora joining up with TWEWY mainstays Neku, Joshua, and Rhyme in an attempt to survive a deadly manhunt in Traverse Town. Tetsuya Nomura, a prominent producer/designer behind games like KH, TWEWY, Final Fantasy VII, and Super Mario RPG, gave an interview recently where he addressed the characters' inclusion. Rhyme, a prominent TWEWY protagonist, does not have any lines in Dream Drop Distance save for reaction sounds. When commenting on the reason why they included her at all, Nomura replied that it was "out of consideration of the future of The World Ends With You series." While he would not comment on a sequel directly, he remarked, "I can't say anything at present ... But there probably is something."

There are no exact sales figures for TWEWY, but based on its combined sales figures from 2008, it's reasonable to think it ended up selling about 400,000 copies. While Square Enix seems more interested in mega-blockbuster games, a fanbase a few hundred thousand strong is nothing to sneeze at. The good news is that if Square Enix decides to go ahead with the sequel, The World Ends With You, Too is a title that pretty much writes itself.