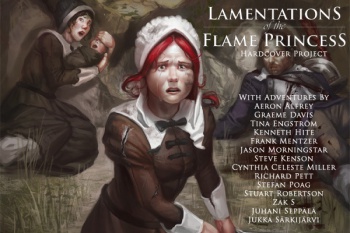 Lamentations of the Flame Princess could use your support.

The "Old School Renaissance" is the collective name given to a movement of tabletop roleplayers who enjoy the style of play epitomized by Gary Gygax and Dave Arneson in the late 70s. To the OSR, the first edition of Dungeons & Dragons is a jumping off point for codifying house rules honed by decades of play. (Read this series of articles on more from about OSR.) Thanks to the Open Gaming License, gamers have several options for re-acquainting themselves with the fantasy roleplaying of a bygone era, and one of the most interesting systems is from James Raggi. The name alone is unique; Lamentations of the Flame Princess evokes a much different feel than D&D. The core rules of LotFP have been in PDF form, but Raggi would like to see it printed in hardcover and that's where you come in.

If you're interested in helping sustain weird fantasy roleplaying with a healthy dose of horror mixed in, as well as supporting the creative work of dozens of writers and artists, you could do a lot worse than heading over to Raggi's page and contributing a few bucks. There's about 40 days left, and Raggi is already halfway towards his first goal, but there's a lot of bonus material left to fund.

Check out Lamentations of the Flame Princess's page on IndieGoGo.

Cthulu will thank you.

Gallery of the Day: 8 Reasons You Should Be Playing Tabletop RPGs DrStrangelove 10 Comments
Comments on