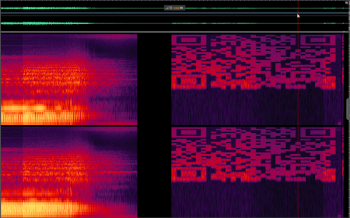 There are some puzzles even Gomez can't reach.

Sound, typically considered by sane people to be invisible, is data (at least on a digital level) and as such, can be visually represented in a variety of ways. The one with which most are probably familiar is the wave form, you know, that sort of zig-zaggy graph that peaks and dips when things get noisy or quiet. Perhaps less commonly known is the spectrogram, a graphical representation of spectral density of an auditory signal over time. Well, at least one person knows what it is, because he or she decided to dig into XBL indie hit Fez's twenty-six-track chiptune soundtrack and poke around. So what was in there? Well, we won't spoil much for you in case you want to look for yourself.

One of the mysteries that we don't mind sharing (because it, itself is mystery anyway) is a QR code that leads to a strange string of dates: 1955 1958 1960 1961 1967 1969 1971 1977 2003 2005. Why was this tucked away in the silence during the last few seconds of one of the tracks? Who knows. Similar bits of weird seem to be embedded toward the end of many of the lovable chiptune medleys that compose the album, though most aren't as easily understood as a QR code.

This meta puzzle (if you can call it a puzzle) actually works quite well with the game's theme. While it wouldn't be particularly fair to call sound "2-D," it's generally represented as such, except in the case of the--you guessed it--spectrogram, which generally tracks three dimensions of auditory signal: frequency, amplitude, and time. So, that's cute.

If you want to seek out more fun(?) for yourself, you're going to need a few things. First, get yourself a copy of the soundtrack, currently offered as a "pay what you want" deal with a $7.00 minimum price. Then scoop up something that will let you play the files back inside any software that offers a spectrogram visualization option. Be sure to let us know if you find a QR code that translates into a garsh-darn map for all those garsh-darn doors in the game!