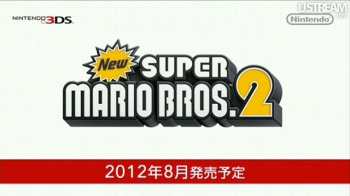 Nintendo announced new games for the 3DS and the Wii starring an Italian plumber and a hungry pink ball.

Peruse the shelves wherever games are sold, and you'll see more than a few games featuring Mario in the Nintendo section marketed as "family fare". A red-shirted plumber with a mustache is not as creepy as it sounds, I suppose. Well, you can expect another title starring Mario, his brother Luigi, and a couple of toadstools this August 2012, because Nintendo announced New Super Mario Bros. 2 is on its way for the handheld 3DS system. Also in the works is a compilation of Kirby games for the Wii to celebrate the corpulent star's 20th birthday.

There's not much details on New Super Mario Bros. 2 except that it follows on the heels of the recent side-scrolling platforming reboot on the Wii. Nintendo promises a game that's easy to pick up and play on the handheld 3DS, but I'm sure there are customers who would rather play with Mario on a home console. I bet the move to the handheld had more to with trying to sell more 3DSs than anything else.

The Kirby compilation doesn't have a name or a list of its component games, but expect a walk down the pink puff ball's most entertaining titles like Kirby's Dream Land and Kirby's Epic Yarn.

"A new Mario game and a big Kirby celebration will help make 2012 an especially great year for Nintendo fans," said Scott Moffitt from Nintendo of America. "Whether they're playing at home on Wii or using Nintendo 3DS to have fun on the go, players can look forward to experiencing some of our biggest franchises in exciting ways."