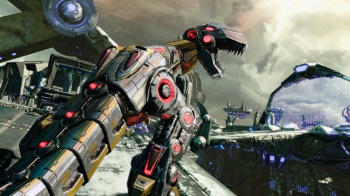 The self-proclaimed "King of the Transformers" was nearly blacklisted by Hasbro.

In a modern media landscape littered with unnecessary franchise revivals and nostalgia exploitation, it's easy to forget that, yes, there are a few things from our collective childhood still left untouched. One such set of characters are the Dinobots, the reptilian Transformers faction famous for characters such as Grimlock, Slag, Sludge, Snarl, and Swoop. Now, if you're wondering why someone hasn't yet jumped on the idea of taking humongous, robotic, sword-fighting, fire-breathing, transforming, prehistoric creatures from outer space, and it to make gobs of money from twelve-year-old boys (and, admit it, the rest of us) the answer may surprise you: They've been shelved. Officially. Or, at least, they were shelved until one videogame developer's personal passion for the franchise convinced Hasbro, the ruling steward of all things Transformer, to resurrect the long-forgotten beasts.

At some point in the timeline of toys, TV, and Michael Bay movies, Hasbro chose to permanently retire the Dinobots, halting anyone (Mr. Bay included) from ever being able to use the characters or their storyline. Still, Matt Tieger, Game Director of High Moon Studios (which had previously made Transformers: War for Cybertron), travelled with his team to Rhode Island to pitch a game highlighting Grimlock, his favorite speech-impaired tyrannosaurus, without knowing the king lizard had been already been blacklisted from future canon.

"It was really easy for me to get behind Grimlock as a playable character ... for some very selfish reasons," Tieger said during a recent interview with Polygon. "He was a big fucking space T-rex. Who doesn't find that interesting? He [is] a story driver. You don't even have to like Transformers to be interested in this character."

Sadly, despite Tieger's enthusiasm, his pitch was rejected. Hasbro simply refused to allow the Dinobots back into the Transformers' story, telling Tieger, "That sounds really exciting - to you--but for us, it doesn't really work."

There were a few reasons Hasbro wasn't interested. Firstly, there was the origin story. According to canon, the Dinobots became Dinobots on Earth, and Earth is out of High Moon's jurisdiction for the Cybertron game series. The other issue was style; as Tieger puts it, "In some ways I think Steven Spielberg and Jurassic Park rethought what we think about dinosaurs. If you think about what [Dinobots] looked like in the cartoon, they were the traditional tail dragging ... King Kong style. And that's not what we think about them today." To put it simply, Hasbro wasn't convinced that the Dinobots could surpass the 1980s nostalgia factor, and kindle new interest from those not old enough to remember them.

Once back in San Diego, Tieger and his team decided to rework Grimlock instead of working without him, despite Hasbro's answer. Working with the studio's lead writer, he began to pore through old Transformer stories to see if there could be a solution that remained true to the spirit of the original story, without actually being the original story. Eventually, they decided on something conceptually relevant to the Transformers universe that also met Hasbro's confines: Shockwave, the "mad scientist" of the franchise, created the Dinobots.

With that problem hypothetically solved, Tieger went to work on Grimlock himself, updating the character's gameplay mechanics to help add variety to the upcoming Cybertron sequel (a common fan complaint of the first), while tweaking his character design for a more modern appeal. In the end, Tieger's team had created a Grimlock true to his roots, yet tweaked in personality, look, and abilities to allow for his return to an unfamiliar era.

"He's kind of the Hulk character in a lot of ways," Tieger said, "and we allow that to be part of the gameplay. In a game when you've been playing for a long time and can transform whenever you want to, having to rethink not just ranged combat, but transformation is pretty varied and is going to challenge you and push you in an interesting way. And it all wraps really nicely with the story about who this character is. It just innately makes sense."

Having addressed Hasbro's concerns, Tieger reformulated his pitch, and flew back to Rhode Island for round two. This time things were different. "They loved it," he said. "They were really thrilled that we had listened to what their concerns were and had solved the issues. We made them relevant." Thanks to the efforts and dino-passion of Tieger and his team, not only has High Moon Studios secured Grimlock for its upcoming Transformers: The Fall of Cybertron, but also added a new chapter in the Transformers universe and, perhaps, opened a path for a true return of the Dinobots.

Miracle of Sound: Encore: Roll Out and The Escapist Expo MiracleOfSound 19 Comments
Comments on