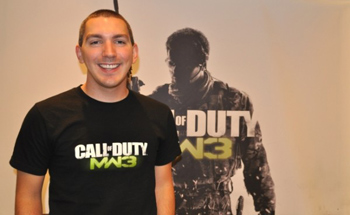 For a long time, Robert Bowling - a.k.a. fourzerotwo - was the public face of Call of Duty. As a higher-up at Infinity Ward, he helped shape Modern Warfare and disseminated information to the public via interviews and social media. He also got a lot of shit from fans. Then about a month ago he called it quits, went cold turkey from everything CoD. Bowling announced a new venture this week that he funded himself - a startup called Robotoki seeking to keep independent from the publisher's money-yokes. Based on Bowling's time with Activision, he knew exactly what he wanted to avoid.

"When I made the decision to resign from my previous position at Activision, I only knew one thing for certain," Bowling said. "I knew what I didn't want to do, but that eventually led to clarity on what I did want to do.

"When I left, it was solely to follow that passion to create new opportunities and experiences."

For a new company like Robotoki to stay independent, it was important for Bowling to keep influential money people away. "I decided to self-fund the formation of the studio, the initial team, and our new IP, and to set a guiding principle for the studio moving forward to work exclusively with partners that supported that independent model and mentality by allowing the creative vision holders behind a project to retain control of it."

Robotoki's first project isn't yet public, but Bowling divulged he aims to deliver a multi-platform experience to bridge the gap between mobile, console and PC gaming. "I believe we have moved away from telling our players how to enjoy our game, and our job is merely to provide them a platform to dictate their own experience," he said. "Therefore a player on mobile should be able to engage in the universe, continue their progression, grow their persistent character, and experience the lore of the universe in a unique way from the other less tactile experiences on PC or consoles and vice versa."

I don't know what genre of game Bowling has in mind - my bet's on shooter, given his experience, even if his words hint at an MMORPG - but those ideas sound pretty intriguing. Here's to your future success at Robotoki, Robert.