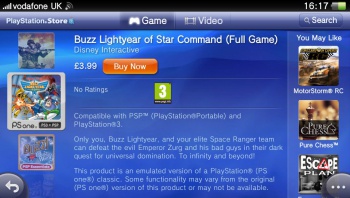 You can now purchase the PS1 game Buzz Lightyear of Star Command for your PlayStation Vita - but you can't play it.

It's been some time since we last had an update on Sony's ongoing efforts to make games for the original PlayStation compatible with the PS Vita hardware. Today, sharp-eyed gamers discovered that 2000's Buzz Lightyear of Star Command was up for sale on the European Vita Store for £3.99. However, while the game was available for purchase and download, any attempts to play it resulted in failure.

One NeoGAF user found that while the Vita tried to load the game in its PSP emulator, the interface was tailored to resemble the PS1 disk tray, suggesting that PS1 functionality will indeed be coming soon. Sony big boss Shuhei Yoshida seemed to confirm this on Twitter, responding to a query about PS1 compatibility by saying that Sony's engineers "are working hard on it," and asking for patience.

Obviously, this whole kerfuffle is the result of someone screwing up somewhere, though on the grand scheme of things it's a really minor error. We all know that PS1 compatibility will be coming to the Vita before too long - if only to give Square-Enix yet another platform to which it can port Final Fantasy VII without remaking it.

The real question, though, is this: With the PS1 library one of the most famously diverse and acclaimed in history, why the hell would you kick things off with Buzz Lightyear of Star Command?

e3 2014: Everybody's Gone to the Rapture Tells Stories Only a Game Can Tell Encaen 16 Comments