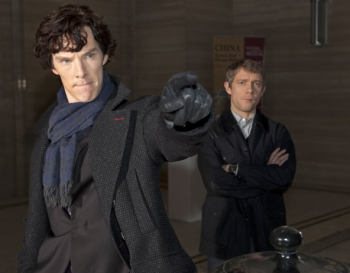 Benedict Cumberbatch is weird-looking, sure, but there is a twinkle to him that draws the eye. Most of us think of him as the face of Stephen Moffat's Sherlock on the BBC which casts Cumberbatch as a modern-day consulting detective solving crimes in London with Martin Freeman's Watson. In searching for actors to play the antagonist in his high-profile sequel to the Star Trek reboot, J. J. Abrams had Cumberbatch at the top of his list. Last December, Abrams asked the Brit to submit a taped audition, but it being the holiday, Cumberbatch couldn't find anyone to do it professionally. According to an article in the New York Times, he "begged" a friend to record video of his performance with an iPhone, which he emailed to Abrams. Days later, he had the role.

"We observe this little Judeo-Christian cult holiday called Christmas, whereas, you know, some kids in this part of town with their Crackberrys, don't," said Cumberbatch referring to the city of Los Angeles around him.

The audition's low quality didn't affect the performance, in fact, Cumberbatch's scramble to get it made might have contributed to its power. "I was pretty strung out," he said, "so that went into the performance."

Abrams quickly leaped on the casting of the Brit in Star Trek 2, calling the audition "one of the most compelling audition readings I'd ever seen."

Just who is Cumberbatch playing? Is it the role of Khan that many fans assumed the antagonist of the second Star Trek film would be? "You could stick a knife in my thigh, and I wouldn't tell you," he said, before admitting there was one torture technique to which he might succumb. "Pull the hair on my head the wrong way, and I would be on my knees begging for mercy. I have very sensitive follicles."

So do the otters, Mr. Benedict. You don't want us to terrorize them, do you? Just tell us!