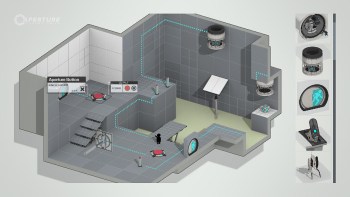 Valve is rolling out the Portal 2 "Perpetual Testing Initiative" in May.

Have you played Portal 2 yet? I haven't but apparently it's pretty good, so in what I'm assuming is an effort to boost its profile among mainstream gamers and give sales a bit of a goose, Valve is releasing the Perpetual Testing Initiative DLC on May 8 at no charge.

The Perpetual Testing Initiative features a "simplified puzzle maker" that will let players create all-new levels from within the game and then share them via the Steam Workshop, where their fellow gamers can browse, play and vote on them. Word of the new "custom test chambers" first came to light in October 2011, when it was revealed that Valve was working on a simplified map editor that would let players create their own single-player and co-op Portal 2 levels. Intrepid Portal fans can create their own levels now using the Source Developers Kit, but it's apparently not the most intuitive process in the world; the PTI will presumably make Portal 2 level design less painful for people who don't actually want to be full-time game designers.

Unfortunately, it doesn't look like the promised support for co-op map making will make it. The word from Odessa Cubbage himself [via the Steam forums] is that in order to get it out as quickly as possible, it won't be included in the initial release of the Perpetual Testing Initiative but will instead be added in a future update.

UPDATE: Now with video! The Perpetual Testing Initiative trailer explains with far greater detail and precision than I ever could how the great minds at Aperture Science plan to turn around the company's sagging profits by putting one over on the Mole Monsters. Sounds like a rock-solid plan to me. Get all the details at thinkwithportals.com.