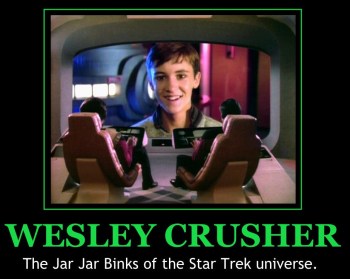 I'm old enough to have watched Star Trek: The Next Generation when it was new, and I hated Wesley Crusher with a passion. I dreamed of the day he'd be blown out an airlock, or have a flux capacitor dropped on his head, or get eaten by Worf, and when he finally left the series I raised my arms to heaven in a joyous hallelujah. Wesley was gone!

But then a funny thing happened. As I got older, I discovered that Wil Wheaton, the actor who brought the accursed Mr. Crusher to life, was actually a pretty cool guy. [Or at least he plays one on the internet.] He's funny, smart, self-deprecating and well aware of just how popular his character was with the vast majority of Star Trek fans. It also turns out that he struggled with his fair share of hangups about being on the show, leaving it, and then coming back.

Wheaton's response to a question about reuniting with his former castmates, asked by none other than Aaron Douglas, AKA Chief Tyrol of Battlestar Galactica fame, doesn't air any dirty Star Trek laundry [well, except that Levar Burton "never f*ckin' liked him"] but it does offer a bit of a surprising insight into what drove his decision to leave and, more importantly, how it left him feeling like an outsider for years after.

The ending is happy, of course [except for the Burton thing] but it's still a touching story and, for those who remember what it's like to really, really want Wesley to die, a fascinating look at the separation between character and actor. It's also a blast seeing everyone back together again - but man, Jonathan Frakes is making me feel old.

via: The Mary Sue