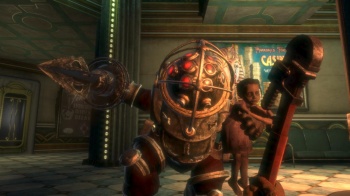 After BioShock: Infinite, the series may hit the big screen.

Like the city of Rapture itself, the movie adaptation of BioShock is hidden from sight and wrapped in mystery. Despite being signed four years ago, the film based on the bestselling steampunk FPS has met with one setback after another. While movies based on videogames can be notoriously dodgy about actually releasing, Ken Levine, the creative director behind the series, believes that the BioShock film is not dead - just resting.

"The thing with Gore [Verbinski] didn't work out, but there's no such thing as 'it's finished' when it comes to making a movie out of something," said Levine in a recent interview. While Levine admits that given the movie's tumultuous past, it would take a mighty celestial convergence to get the film back on track, he hardly sees the task as impossible. He views the project more as a battle of resources. "Right now, we're choosing our battles and focussing (sic) on making BioShock: Infinite."

After four years in and out of production and two directors calling it quits, BioShock's film prospects don't look as good as they once did. Still, if the driving player behind the series is willing to throw his weight behind the movie, it could eventually see the light of day. BioShock: Infinite launches in October, though, so even if Levine focuses all his efforts on a film as soon as the game is out the door, it could be another few years before a film hits theaters. If the film ever sees a release, will Levine still be making BioShock games by then?