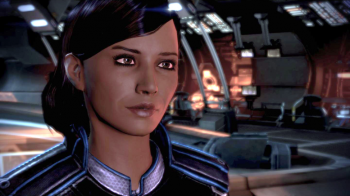 Didn't want to be "writing lesbians for other straight guys to look at."

While several BioWare games now have flirted with allowing player characters to pursue gay and lesbian romances, Mass Effect 3 was the first to introduce characters - Esteban Cortez and Samantha Traynor - who could only be romanced by a same-sex partner. In a post on the BioWare blog, writers Patrick Weekes and Dusty Everman discussed the difficulties of trying to write believable same-sex romances that felt genuine and realistic without any life experience to draw on.

"I'm a straight white male - pretty much the living embodiment of the Patriarchy," said Weekes. Even though he had already had some experience with writing (potentially) same-sex love with Liara in Mass Effect 2's "Lair of the Shadow Broker" DLC, he was keenly aware how being a male writing a lesbian romance could be perceived, if handled poorly. "I really wanted to avoid writing something that people saw and went, 'That's a straight guy writing lesbians for other straight guys to look at.'"

Similarly, Everman was all too aware that he was treading on unfamiliar ground with writing the character of Cortez and the ensuing romance realistically. "I've never been romantic with another guy, so I couldn't write from personal experience," he explained.

For both writers, the challenge lay in creating something - and someone - that felt genuine. Weekes' first draft of Traynor had her "identifying and overcoming" the challenges of being gay, but he had been so focused on creating a "positive" story that he hadn't taken the time to make the character behind it feel real. Subsequent drafts focused more on her characterization as a lighthearted lab tech trying to make her way on the front lines of combat, with her lesbianism present and overt but not announced.

"When Cortez says 'I lost my husband,' every player knows his sexuality," said Everman. "[P]recious word budgets aren't spent to establish that fact. Instead, the time is spent bonding over past losses and future hopes." By the 22nd century, gender preference "will just be an accepted part of who we are. So I tried to write a meaningful human relationship that just happens to be between two men."

Ultimately, both Everman and Weekes wanted to create believable, enjoyable characters for Shepards of both sexes and gender preferences. "Everyone, straight and gay alike, can get to know the character, and romantic feelings only surface towards the end of the arc," said Everman.

Weekes agreed. "If I've done my job right, I've made Traynor a character that people in the LGBT community will like not because we happened to put a gay character in the game, but because she's a great character even if you never romance her."

If you'd like to read more about the writers behind the same-sex relationships in ME3, the full interview is over at the BioWare blog.