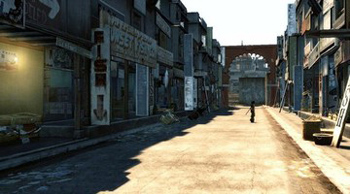 The long awaited sequel to Beyond Good and Evil is in the "active creation stage."

You know how in survival movies there's always one guy who wants to remain in the crashed spaceship/plane/bus and wait for rescue, even though it's obviously not coming? I feel like that guy every time I write about Beyond Good and Evil 2. It's coming, people. It's coming. You just have to have hope.

Though perhaps my faith is about to be rewarded. According to Michel Ancel, BG&E 2 is now off the back burner and has entered active development.

"We are in an active creation stage and at this moment we are only focusing on the game and making it the best game that we can,"he told Toulouse Game in an interview later translated by NeoGAF.

Ancel didn't give much away about the game, not even which console it would be appearing on.

"That decision would just distract us from that objective. I can say that it's a very ambitious game and we need some tech to achieve that ambition," he said. "We focus on the game. We create it first, then we'll see what can run it. We don't say 2013 because we don't know when it will come. We're working to create a great game and it needs more tech."

Previous reports indicated that BG&E 2 wouldn't be coming out until the next hardware generation was well established. What is apparently a leaked screenshot of the game has been circulating the internet - you can see it in the top right there. It looks nice, but next-gen nice? Perhaps not.

When asked about the game's leaked concept video, which some have said bears a resemblance to Mirror's Edge, Ancel responded that the game draws more from Ubisoft's platformers, Prince of Persia and Assassin's Creed than EA's first person parkour game.

"We use a very dynamic camera that shakes a lot during the action to add life to the camera, giving the impression of an action news cover team following Jade," he said. "Maybe that could be similar to Mirror's Edge but the game itself is very different."