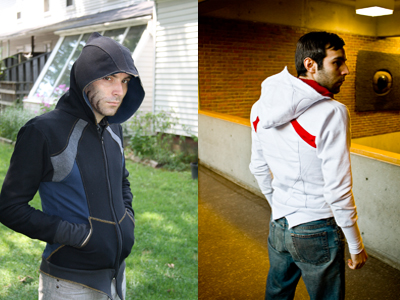 Diving into a bale of hay from sixty stories has never looked so fashionable.

If there's one thing that the Assassin's Creed series has taught me is that it can be awfully hard for an assassin to blend into a crowd, especially when you don't look the part. Enter Enzo Volante and his one-man company, Volante Design. Inspired by the free-running master assassins of the Assassin's Creed games, Volante has designed and produced a clothing line of hoodies that put a modern spin on the acclaimed action-adventure series.

In his own words, Volante takes "inspiration from comic books, videogames, film, anime, and anywhere else we can find heroes and villains" to make some very unique (and nifty!) looking clothing. Volante's previous works have included a yellow-and-blue Wolverine inspired hoodie, a solid-looking Speed Racerjacket, and an incredibly cool (and patriotic) Captain America-style jacket.

The standard "Modern Assassin Armor" hoodie comes in both men's and womens at approximately $155 USD apiece, with options available for un-lined denim at $240 USD or lined denim at $350. And just in case the colors aren't to your liking, Enzo encourages individuals who place orders to offer up their their own color schemes for the jackets, and has items as low as $90 USD. You can check out Volante's store here to view the rest of his designs.