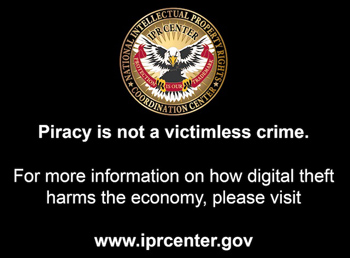 The new copyright notices are there to "warn," "educate" and presumably irritate.

As part of the ongoing plan to stop piracy by annoying legitimate consumers, the US government announced two new copyright notices to be added to DVDs and Blu-Ray movies. Six major movie studios intend to start using the notices - which are ten-seconds long and unskippable - this week.

The first notice features the FBI and Immigration & Customs Enforcement (ICE) Homeland Security Investigations logos, as well as the traditional "Criminal copyright infringement is investigated by federal law enforcement agencies and is punishable by up to 5 years in prison and a fine of $250,000," message. The second notice shows the logo for the National Intellectual Property Rights Coordination Center, complete with a grumpy-looking eagle, a warning that piracy is "not a victimless crime," and directions to the IPR site, which promises to explain how piracy is affecting the US economy.

The fact that only legitimate customers will be subjected to these notices (presumably we're the victims mentioned in the first notice) is actually part of ICE's strategy. The notices are apparently meant to educate the general public, who upon seeing them will naturally take up arms and drive the pirates into the ocean from whence they came.  "Law enforcement must continue to expand how it combats criminal activity; public awareness and education are a critical part of that effort," announced ICE director, John Morton.