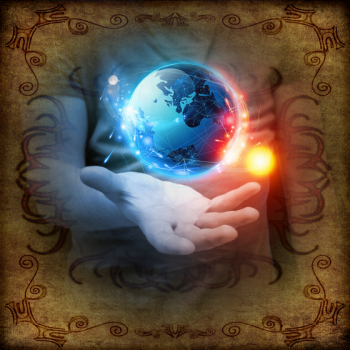 Whether it was Gandalf the Grey, Harry Potter, or even the hopeless, long-suffering Rincewind, chances are a wizard has caught your attention at some point. When they raise their wands and bellow incantations, you just know that someone's day is about to get ruined. If you find yourself sadly unable to use magic in everyday life, however, you are not alone. Startup developer MoveableCode has just Kickstarted Incantor, a peripheral-based game that works in conjunction with smartphones that allows users to battle, quest, and cast all manner of magic spells in the real world.

The game's unique selling point is a physical wand that works as a player's gateway into the world of Incantor. "The Incantor magic wand is a sophisticated motion controller, paired via bluetooth with your smartphone," says Nicholas Napp, CEO of MoveableCode. "The system can identify what spells have been cast and who the spell targets, enabling magical battles and quests to take place in the real world." The game's Kickstarter site is quick to reiterate that the wand is a play apparatus, but definitely not a toy. The wand possesses haptic feedback, can lock onto targets to cast a variety of spells, and requires the user to master "magical martial arts" to get the most out of it. Multiple wands representing ten distinct classes will be available.

While the players and their wands do most of the legwork, their phones can take care of the clerical details. Each player's phone will assign quests, track stats, spawn enemies, and allow players to customize their characters. The game also promises to be intensely social, as aspiring wizards can band together with anywhere from one to dozens of other players in magical guilds called "Bindings." MoveableCode hopes to add one-on-one PVP later.

MoveableCode wants $100,000 to get the game off the ground, which is really not a whole lot, considering what a AAA title with similar features would cost to make. If you want to reserve your very own wand, you'll need to pledge at least $100 for an exclusive design (a normal one will cost about $60 at launch), but there are cheaper alternatives for people who simply want to get a sneak peek at the lore or set up their profiles early. The game could be up and running as early as December 2012, but only if it gets the requisite funding. You may need to cast a good old-fashioned Invoke Wallet, but it's probably cheaper than training to become a real wizard, not to mention much more feasible.

Now You See Me 2 - Now You Don't Marter 8 Comments