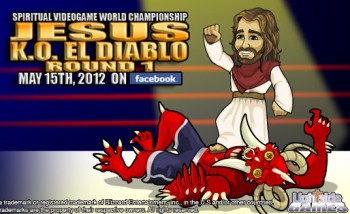 Jesus has had enough of Diablo's crap, so he's going to Facebook to clean house.

Today, May 15, is the day that the long-awaited Diablo 3 was finally unleashed upon the world. And that's why today is also the day that Lightside Games has chosen to debut Journey of Jesus: The Calling, a game that lets players "walk in the Messiah's steps, in an authentic experience of Israel set in Christ's time." Players will travel with Jesus through the Gospels, earning an education about the history and politics of the Holy Land along the way.

Now, it's true that we don't normally cover Facebook game announcements here at The Escapist and especially not those with such a tightly-focused target audience, but Journey of Jesus is special. Why? Because the Journey of Jesus Facebook page currently boasts an image of Jesus standing over the prone form of a boxer-clad Diablo, fist raised in the air Rocky-style, under the headline, "Spiritual Videogame World Championship: Jesus K.O. El Diablo."

I'm not making any of this up, and neither is Lightside Games, which has already released a similarly-themed game on Facebook called Journey of Moses. And while Journey of Jesus won't actually feature the Son of God punching the stupid out of the Lord of Terror, the developers say they do think the game will "open conversations about faith."

Regardless of whether or not there's actually a Thrown-Down in the Holy Town [think Thrilla in Manila, but with less inspirational characters], using a game like Diablo 3 to promote a decidedly religious game like Journey of Jesus is still a fascinating and potentially controversial marketing move. Lightside even plays it a little bit on the coy side, suggesting that the timing of the Journey of Jesus announcement is entirely coincidental.

"Interestingly, also launching today: Diablo 3, the newest installment of a game series built around battles with demonic creatures, which debuted in 1996 with the tagline, 'All Hell breaks loose'," the studio said in a press release.

"Both games immerse the player, and you are what you eat," Lightside CEO Brent Dusing added. I can't even begin to guess what that's supposed to mean.

Journey of Jesus: The Callling is live now on Facebook.