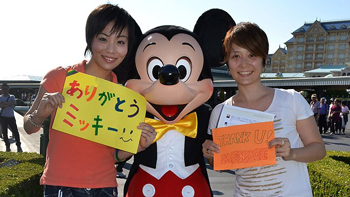 Mickey Mouse doesn't care who you sleep with.

As Japan's legal definition of marriage is laid out in the nation's constitution in very specific "man and woman" terms, it seems unlikely the nation will allow gay couples to legally marry in the near future, but that hasn't stopped homosexual lovebirds from going through the ceremonies anyway.

When lesbian couple from Tokyo asked the staff at Disneyland Tokyo if they could hold a wedding ceremony at the theme park, they were told that since "ordinary customers are watching" one of the women would have to dress as the bridegroom.

The disappointed couple took to Twitter, and some angry ranting later, a resort operator contacted the ladies and told them they were free to "marry" in whatever attire they desired. They can not, however, exchange vows at the onsite chapel "because of Christian teaching."

According to ABS, the cost of a Cinderella's castle wedding at Tokyo Disneyland is a staggering 7.5 million yen - around $95,000 US. Mickey doesn't discriminate against the gay, but he certainly discriminates against the poor. Damn.

The couple went to Disneyland in person, where they met Mickey, money-grubbing rodent that he is, and thanked him personally.

"Mickey first looked surprised to hear that we are a 'couple of girls'," the ladies wrote on their blog. "But we said we were there to thank him because same-sex weddings can be held at the Disney Resort, and he celebrated with us."

Japan has been slow to change its laws to account for homosexual or transgendered couples, largely due to the nation's glacial approach to social issues, but some maintain that LGBT or queer lifestyles are accepted, but not discussed.

Disney resorts in the US have apparently been offering same-sex marriage ceremonies, regardless of their legality, since 2007.

The Downside to Marriage Equality The Wooster 30 Comments
Comments on