A chilling example of catsploitation. 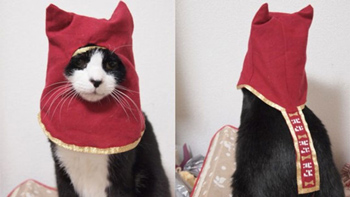 Since we're currently in the rather dull period of history where classic forms of entertainment such as bear-baiting and dog-fighting are frowned upon, but society has yet to fully embrace the idea of the Thunderdome, people are forced to find acceptable outlets for their natural sociopathic tendencies. Dressing up your pets like they're human beings is one such outlet.

I am, however, willing to give whoever made this Journey-themed hat for their cat a moral pass - a get-out-of-judgement-free card, if you will - because this hat is fantastic.

The cat, and by extension, the hat, belongs to Japanese Twitter user @meg1jiku. The text that accompanied that picture is of course complete gibberish to me, but running it through a translation service produced the following:

"The third journey of wind cat. Mr. Vito could wind red hood! Again, a complete ww I only had a good journey of Vito #wind"

I was hoping the tweet would explain how he/she managed to get the hood on the "Wind cat," without losing significant portions of his/her face. Alas.