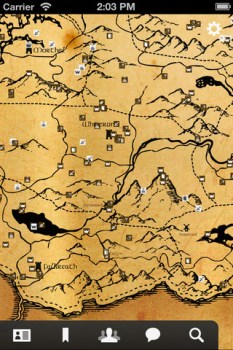 Dragon Shout, you may recall, is an iOS app designed to make mapping the lands of Skyrim a little less of a chore. It allows users to take their maps with them, annotate them and even share those notations with friends through built-in social functionality. And it's free! Alas, it also infringes upon copyrights held by Bethesda Softworks parent ZeniMax, or so the company claims - although rather oddly, it doesn't appear to be working too hard to make the app go away.

The infringement notice, which was actually sent back in late April, asked the developer to remove the app voluntarily, but Apple hasn't yet pulled it from the App Store because ZeniMax hasn't yet laid out how exactly it infringes. Furthermore, the developer, "Blalock," said he hasn't received a cease-and-desist letter yet and "several" emails to ZeniMax seeking details have gone ignored.

"I did my best to ensure the app was not violating anything," he told TouchArcade. "I looked up U.S. trademarks and copyrights for 'Dragon Shout' and at the time there wasn't any. I had the map hand drawn. I intentionally didn't use any graphics or wording that would possibly be owned by Bethesda. So, I'm still not sure what they say the app violates."

Not that I would ever suggest bad behavior on the part of ZeniMax, but the long silence following the initial warning has me wondering if maybe an overzealous lawyer somewhere saw the app and reacted a wee bit too quickly, without first digging to see if there was any basis in the claim. That sort of knee-jerk response could be encouraged by the existence of Bethesda's "official" Skyrim app, which is free for the basic map but offers up to $10 worth of in-app purchases for things like interior maps and various points of interest, but that of course is pure speculation.

Dragon Shout remains on the App Store for now but the clock may be ticking, so if you want it, you might want to get a move on.