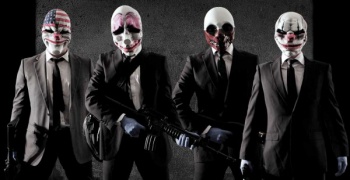 Valve has new business associates, and they rob banks for a living.

Overkill Software, creators of Payday: The Heist, has announced a joint venture with Valve, those zombie-loving folks behind Left 4 Dead. Overkill Game Director Ulf Andersson refused to do more than tease, so the exact nature of the project remains a mystery.

Andersson described Overkill's new joint project as "a very cool blend of Payday and Left 4 Dead," and claimed that "it will have some players check into the hospital before we are done."

Heist simulator Payday and zombie survival bash Left 4 Dead do have similarities beyond gun-fun. Both feature four player co-op play, both have adaptive AI that changes as the tactics of the players change, and both are distributed via Steam. Those of you currently playing Payday may have noticed the occasional in-game hint dropped by the developers about this move; well, now you know what those hints were all about.

Judging by Andersson's teaser, which flings around words like "infectious," it seems likely that Dallas, Hoxton, Chains and Wolf - or whoever the protagonists end up being - are about to catch the Green Flu, or something very like it.