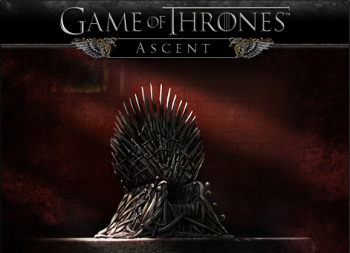 Screw them, or screw them over.

There's plenty of limb-chopping sword-fighting action in George R.R. Martin's A Song of Ice and Fire novels and their hit HBO adaptation Game of Thrones, but it's never really the main draw. Most people tune in for the dynamic social, political and sexual machinations as warring families vie for the throne and crown of the land of Westeros.

In other words, Game of Thrones seems to be a better fit for backstabbing board games like Diplomacy than generic fantasy RPGs like the one that just came out. HBO and online game developer [a href="Disruptor Beam</a] seem to think that atmosphere of political intrigue can be captured by pitting players against real-life opponents - in a Facebook game.

"You and your friends will live out tales of intrigue, sacrifice and deception within the Game of Thrones universe," reads the official description for Game of Thrones: Ascent, and the full announcement elaborates. Players will assume the identity of a noble of Westeros and be able to swear fealty to one of the series' seven major houses. Then, they must "[secure] their holdings, [develop] their lands and personal reputation, and [assign] sworn swords to quests" in order to advance their standing amidst the chaotic upheaval.

"Everyone at Disruptor Beam was a huge fan of Game of Thrones long before we began working on the game, so we recognize that other fans expect character-driven conflict and intrigue to take center stage in our new game," said Jon Radoff, CEO of Disruptor Beam. "Westeros is the perfect setting to deliver on our vision of weaving stories through decisions and social interactions."

I certainly agree that Game of Thrones' social intrigue is much more suited to a game that actually involves interacting with others rather than a rote hack-and-slash. If Game of Thrones: Ascent can actually allow players to not only forge alliances but break them and screw their former teammates over, I could see this working surprisingly well as a social game.

I'm just curious if I can purchase prostitutes who I can use to ply the favors of my younger brothers in return for strategic military alliances. Because if I can't, y'know, what's the point?