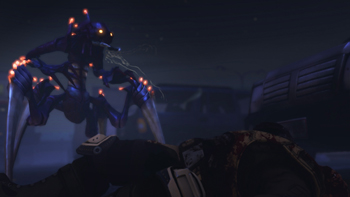 Pre-order incentives and a special edition for PC players have also been announced.

We've seen a lot of highly-anticipated games get delayed lately, but fans looking forward to 2K Games' upcoming XCOM: Enemy Unknown can breathe a sigh of relief: Firaxis' take on X-COM will be hitting store shelves this October.

The X-COM reimagining will be available to US players on October 9, while international players can anticipate an October 12 release. The title should not be confused with the upcoming XCOM, a first-person shooter in development from Bioshock 2 developer 2K Marin, which is expected sometime in 2013.

Given that this is a Firaxis game (a company well-known for its PC titles), it's only natural that it's rewarding its core fan base with a special edition. Releasing at $59.99, it will come packed with a poster of the XCOM headquarters, art book, patch, and some digital items, including the game's soundtrack. 2K also revealed that customers who pre-order will receive bonuses as well, including a returning character from X-COM: UFO Defense.

To accompany the news, 2K has released a fresh batch of screenshots, featuring a mix of both gameplay and cutscenes.