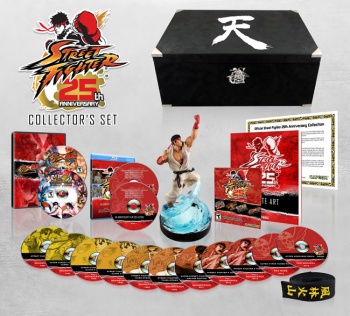 The real fight will be getting all this stuff back in the box.

Back in August, 1987, Capcom released Street Fighter to arcades, unleashing a franchise onto the public that would see countless updates and iterations over its long, 25-year history. There's no doubt that Street Fighter has a huge, important legacy, so it comes as no surprise that Capcom is producing a massive collector's edition to celebrate the franchise's silver anniversary.

Like any late-night infomercial, there's more. The star of the show is an 8-inch statue of Ryu performing a devastating Shoryuken. Best of all, it lights up, so you can rest assured that any monsters under your bed will be thoroughly trashed if they try anything. If you prefer watching Street Fighter more than playing it, this collection might be for you, too. It includes a documentary on the Street Fighter series, the entirety of the Street Fighter animated series, and the Street Fighter IV animated movies (notably, the live-action film is missing). There's also an 11-disc soundtrack and a hardcover art book featuring pieces from fans.

Best of all, fans who really want to get into character can strap on Ryu's black belt. Yes, you get a full-sized black belt in the box that you can wear it in public, should you choose. The major retailers have yet to list it as available for pre-order, but Capcom is stressing the limited nature of collector's edition, so get your orders in early if this is one you want.