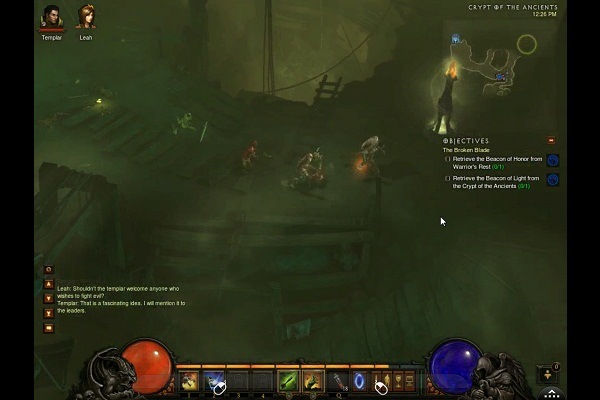 An iPad app lets players explore Sanctuary from anywhere in the house.

One downside to Diablo III is that unless you have a beefy laptop (and a steady internet connection), it can be awfully hard to hunt down the denizens of evil from the comforts of say, your couch or that comfortable hammock swinging in the shade off of your back porch. Luckily, for those lucky few who happen to own an iPad alongside their powerful desktop computer, there's an app that'll let you play Blizzard's high-selling action RPG straight off your favorite tablet.

The app in question is Splashtop's Remote Desktop App for the iPad, which, along with its accompanying desktop computer software, mirrors the display of a Windows PC or Mac on your much more mobile iPad tablet. After installing Splashtop's software, you'll just need to open up the app and connect to your locally-networked desktop PC or Mac to launch Diablo III.

Once in the game, you'll just need to change Diablo III's display setting to "Fullscreen Windowed", and you'll be in business. Splashtop offers trackpad-style controls to help with the ease of controlling your in-game avater versus just tapping all over the screen, and in the event you need to type anything while killing monsters, you can bring up a keyboard with the simple press of a button.

While the iPad is hardly a hardcore gaming rig, it (along with the Splashtop app) apparently runs smoothly enough that there won't be a huge noticeable drop in framerate. Plus, playing Diablo III on your iPad also means you can crush the Prime Evils from just about anywhere in your house.