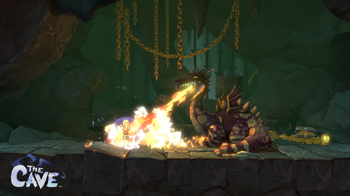 Ron Gilbert and Double Fine are taking us into a cave unlike any we've ever seen in the upcoming adventure game, The Cave. Most of us imagine caves as the dank, dark places filled with bats and bears that they are. Apparently, Gilbert and Co. imagine caves that have personalities and are filled with amusement parks, castles and weapons of mass destruction.

Set to release in 2013, The Cave sounds like just the kind of quirky game you'd expect from Gilbert, the creator of Maniac Mansion and the Monkey Island series. The downloadable title puts players in control of a motley crew of spelunkers as they navigate the pitfalls of a personified cave. A teaser trailer available on the Double Fine site shows off a bit of the puzzle-oriented gameplay, with characters seen flipping levers, dragging boxes and riding a whole lot of elevators. The side-scroller appears to feature a healthy dose of platforming and exploration as well.

Of the seven characters in the game, you'll choose a team of three as you work your way through the adventure. The diverse roster includes a dim-looking hillbilly, a scientist in a clean white lab coat, a futuristic time-traveler and others. Each offer unique abilities that players will have to combine in order to get through puzzles met along the journey.

The Cave has been announced for release on PSN, XBLA and PC, and is due sometime next year. In line with its move toward taking fewer financial risks following substantial income declines last year, Sega will be handling publishing duties.