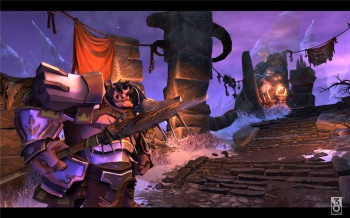 The Amalur MMO was surprisingly far along.

There's not really a silver lining to be found in the cloud that is the gutting of 38 Studios and Big Huge Games. One of the worst parts of it may be that the hard work of almost 400 people to build the Kingdoms of Amalur universe - and its upcoming MMO Project Copernicus - may never come to fruition at all. How would you like to work on a project for over a year, then simultaneously lose your job and realize that said year didn't produce anything anyone would ever see?

What's more is that according to fantasy author RA Salvatore - who worked on Copernicus as a consultant - the game itself was shaping up to be pretty awesome. Salvatore defended 38 Studios and Amalur in a comment to a news story on political blog DailyKOS.

I have to tell you that this was an amazing team of designers, engineers, artists, animators, writers, audio team and all the rest, all chasing a common dream - all pushing the envelope in their respective fields. And this game is much further along than is being reported - I wish I could show you some if [sic] it! - and the environments, the animations and the game-play would blow you away.

He admitted that the MMO market was very different than it had been when Copernicus started gestation 6 years ago - where even strong games with financial backing like Warhammer or The Old Republic could struggle. Still, Salvatore says that the Amalur MMO was worth the work itself.

"Maybe I'll never see a dime for those hundreds of hours," he wrote, "but I got the chance to work in the most incredible creative environment you can imagine. So be it."