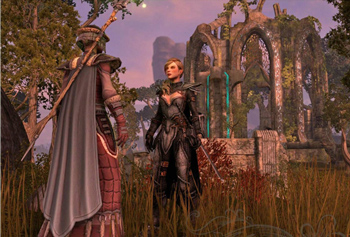 The HeroEngine is only being used as a "whiteboard."

When ZeniMax announced The Elder Scrolls Online, grumpy fans around the globe immediately started voicing concerns that the tile would be another uninspired, by-the-numbers MMO with a popular license slapped across it. It didn't help that early reports claimed the title would be using the HeroEngine, the same engine that powers Star Wars: The Old Republic, which is hardly being held up as an exemplar of MMO innovation. However, it turns out ZeniMax is only using the engine to prototype the game.

"Our plan is for ESO to be a world class MMO, with the most advanced social features found in any MMO to date - so while we were prototyping the game on HeroEngine, we were simultaneously developing our own client, server, and messaging layer that were specifically designed with ESO in mind," game director, Matt Firor told Game Informer. "Think of HeroEngine as a whiteboard for us - a great tool to get some ideas in the game and start looking at them while the production engine was in development."

The HeroEngine was originally developed by Simutronics for use in a title called Hero's Journey, which never saw the light of day. Thus far, the only released projects to use the engine are The Old Republic and an MMO called Faxion, which chances are you've never heard of because it lasted about as long as a mildly-impressive fart.

Regardless, Firor argues that a game's content and quality isn't dictated by its engine.

In general, a game's engine doesn't really define what kind of content, or even what type of game, you can make," he said. "The real factor in stability, graphical awesomeness, and other features is the ability of the programmers and designers that you have working on the game - and the ones here at ZeniMax Online are some of the best in the world. They are what it's going to make ESO stable, beautiful, and fun - not the engine."

A "stable" Elder Scrolls game? Well at least you can't accuse ZeniMax of not adding anything new to the series.