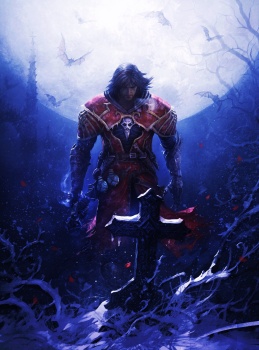 A Lords of Shadow continuation will come to Nintendo's handheld.

What is a new Castlevania announcement? A miserable little pile of tidbits! Those hankering for a new vampire-killing melodrama to take on the go will likely be pleased to hear that Castlevania: Lords of Shadow - Mirror of Fate will make its way to the 3DS in the near-future. However, those hoping for a return-to-Metroidvania-form after the well-received Lords of Shadow will have to continue waiting. Mirror of Fate will be a 3D action/adventure title starring series mainstay Trevor Belmont.

Very little information exists about Mirror of Fate beyond the fact that it will dominate Nintendo Power's cover next month and reveal more information within. The information available suggests that the game will star Trevor Belmont, probably an alternate-continuity version of the one who appeared in Castlevania III: Dracula's Curse, Curse of Darkness, and Judgment. Trevor will wield a modified Combat Cross, perform light and heavy attacks, wield sub-weapons, earn experience, and hunt down hidden items in his quest against the game's various monsters and undead.

These features will sound like old hat to any series veteran; otherwise, welcome to Castlevania. We hope that you will enjoy your stay. Mirror of Fate will probably not radically change the Lords of Shadow paradigm - or indeed, that of Castlevania overall - but could provide a fun way to continue the adventures of the Belmont family while traveling. As long as it's better than Order of Shadows, it should be fine; mankind ill needed a savior such as that.