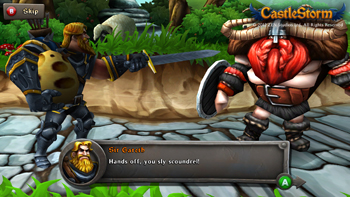 It's unfair that Vikings and knights were separated by centuries, never able to square off. Who would win? There are just too many variables. Medieval knights were armed with more advanced technology, but Vikings had a reputation for toughness that can't be overlooked. Knights had fearsome destriers, but Vikings had longships. Zen Studios, the creators of Zen Pinball 2, upcoming CastleStorm may finally give us the answer we so desperately crave when it pits these disparate combatants against each other in a tower defense/RTS fusion.

The game tasks players pick a side and then construct a castle to house their army. A detailed castle editor is promised, though players will have to choose a design that balances offense and defense to be successful. Victory parameters will be unique to each level, but most will require the destruction of the enemy's castle. In addition to a single-player campaign, the game will also feature competitive and cooperative multiplayer modes.

While it may appear a standard tower defense game, Zen Studios is also incorporating RTS elements into CastleStorm. Players will be required to manage resources and choose between defensive and offensive upgrades for their castle and soldiers. Combat is controlled in real-time, rewarding skilled players who master killstreaks with bonuses. Plain old knights and Vikings will be a big part of basic armies, but sillier units like flying sheep, apple grenades and homing eagles will unlock as the game progresses.

So far, only an XBLA version has been confirmed, but plans are in place to bring the game to other consoles, handhelds, mobile devices and PC. Zen Studios is planning to show off CastleStorm, which is planned for a release sometime this year, at this year's E3.