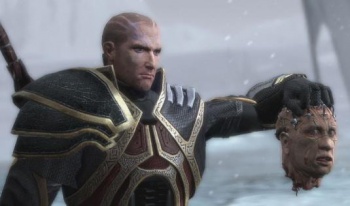 The end of a five-year case surrounding the Unreal Engine 3 sees Epic Games leave on top.

A source close to the ongoing case between Too Human developer Silicon Knights and Epic Games has told the Escapist that a judge has awarded Epic $4.45 million in damages, instantly shifting Silicon Knights from its hopeful $54 million payday, to actually owing money to the company it was attempting to sue.

"We are delighted with the jury's verdict and all of the hard work done by the Hunton & Williams legal team," said Jay Andrews, Epic's General Counsel.

The ruling followed two recent case milestones, neither of which had foreshadowed much hope of a Knights victory in what has now been a five-year-long affair. Troubles began last week, when the courts ruled that due to an invalid expert testimony, no claim (if accepted) against Epic could be awarded more than a dollar in recompense. Soon, the thought of even a quick, hypothetical seven-dollar check vanished when later that same week, all claims of fraud, negligent misrepresentation, unfair competition, and unfair and deceptive trade practices previously levied were dismissed outright.

While Epic has remained somewhat tight-lipped regarding the specifics of its counterclaims since the announcement of their filing in 2007, most center around copyright infringement of the Unreal Engine 3's code. Silicon Knights' initial lawsuit rested upon the idea that Epic had misrepresented the engine, forcing it's developers to build a more competent one from scratch. The result, Knights claimed, was a rushed production schedule, a hypothetically inferior product, and a massive loss of potential sales. Epic, however, holds that during this time, Silicon Knights had full access to the Unreal Engine 3's code, and may have infringed upon it while reconstructing the core of Too Human.

Code copyright infringement is extremely complex, even for the great legal minds among us, and with no specific details on what was found during the court's proceedings, it's impossible to say exactly why the $4.5 million was awarded. This ruling does, however, marks the final judgment of this case, with all claims ruled in Epic's favor.