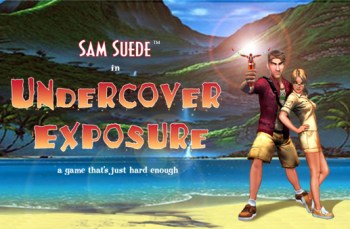 About seven years ago, Leisure Suit Larry mastermind Al Lowe hooked up with lesser-known developer Ken Wegrzyn to work on a game called Sam Suede in Undercover Exposure. The parallels between the two games are obvious, from the names of the lead characters to the Sam Suede subtitle: "A game that's just hard enough."

For whatever reason, the project never went anywhere and Lowe moved on to other things, specifically the Leisure Suit Larry reboot afoot at Replay Games, which recently brought in over $650,000 in Kickstarter funding. Now Wegrzyn is taking his own crack at Kickstarter, seeking $500,000 for the development of Sam Suede in Undercover Exposure - coincidentally or not, the same target Replay set for Leisure Suit Larry - and Lowe apparently isn't too happy about it.

The sticking point is the heavy use of Lowe's name and image in conjunction with the game. The very first line in the description says, "Al Lowe & Ken Wegrzyn present: Sam Suede in Undercover Exposure," and the first image is not from the game, but is instead a caricature of Lowe in a suit. He's also listed first among the three principles responsible for the game, ahead of Wegrzyn and Steve Ince. But Replay Games chief Paul Trowe says Lowe's image is being used without permission and that his participation in the project has been misrepresented.

"I think the blatant misuse of the Leisure Suit Larry name and copyrighted material shows clear disregard for copyright law," he told VentureBeat. "To piggyback on someone else's success is not only rude but also illegal. Those who continue with this will be pursued to the fullest extent of the law. We are suing today."

Wisecrack countered by stating that Lowe did in fact work on the game and that references to the Leisure Suit Larry series "come directly from Mr. Lowe's website with his permission pursuant to a written agreement, and constitute de minimis and fair uses under applicable law."

"The references to Al Lowe's extensive work with Ken Wegrzyn on the design of Sam Suede in Undercover Exposure is truthfully stated and a historical fact," it said. "The original design and prototyping have been completed by Al and Ken, as well as a written agreement with Al Lowe for the Sam Suede in Undercover Exposure Kickstarter with Wisecrack Games."

The top-tier reward for Sam Suede supporters on Kickstarter is actually called the "Al Lowe Edition," which includes admission to a concert featuring Lowe performing with Seattle jazz band MOJO and dinner with Lowe and Wegrzyn. It costs $10,000.