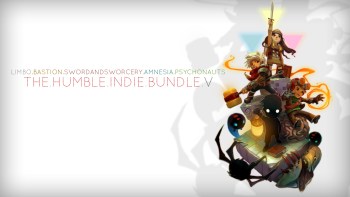 The Humble Indie Bundle V has already blown away every Humble Bundle sales record on the books.

The Humble Indie Bundle V, in case you somehow missed it, is an absolutely amazing collection of games: Psychonauts, Amnesia: The Dark Descent, Limbo, Superbrothers: Sword & Sworcery EP and Bastion, plus soundtracks, all wrapped up in a glorious pay-what-you-want package. It's far and away the best Humble Bundle yet, and so it's no surprise that it's already set a new high-water mark for HIB sales.

It's also interesting to note that as part of the Humble Indie Bundle V, the brilliant Psychonauts sold more copies within the "first few hours" of release than it did during its entire initial retail run. To mark that success, the Humble Bundle guys held an AMA on reddit with many of the developers involved, including Tim "TimOfLegend" Schafer himself, who explained how the Humble Bundles influenced his decision to port the game to Linux.

"Linux was like a party that sounded fun [but] we were afraid to go to because we didn't think we'd know anybody there, and the HiB guys were like your socially fearless friend who says, 'Don't worry, we'll go together'," Schafer wrote. "And when he gets to your house he says, 'Is that what you're wearing?' and you say, 'uh...' and he says, 'Don't worry. I know a guy.' And he lends you a cool leather jacket and you go to the party and when you walk in there's a needle scratch and everybody turns to look at you and your friend gives a cool nod and then everybody goes back to the party. So kind of like a John Hughes film. Hope that helps explain things. That's about as technical as I can go. I just hope I don't accidentally knock over a beer can pyramid that some tough guys are building."

Supergiant Games, the developer of Bastion, also got into the spirit of things with a very sexy wallpaper that you can grab right here.

A little over nine days remain on the Humble Indie Bundle V countdown clock and the average price, which is the minimum necessary to unlock Bastion, is still under eight bucks. That's the kind of deal you probably don't want to miss.

Critical Intel: The History And Abuse of The Fedora Robert Rath 52 Comments