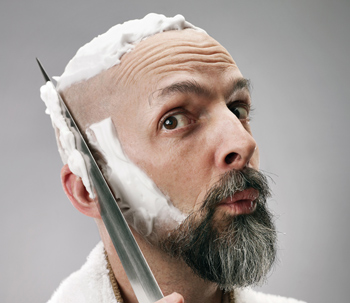 Neal Stephenson wants you to help fund his sword-fighting game.

Now in a perfect world that sentence above would be the end of this article. I'd simply submit it, collect my check and return to drinking, while you scuttle off to give Neal Stephenson as much money as he wants because he's Neal Stephenson. Unfortunately, the recent deluge of Kickstarter projects has probably left you a bit burnt out and leery. Now, even the most promising Kickstarter project needs that special something to ensure it stands out. Well, that's where this promotional video comes in, complete with a very pleasant surprise at 3:04.

CLANG, as the project is called, seeks to capture the exciting back-and-forth of sword duels. Stephenson starts off with a brief monologue, pointing out that video game melee weapons rarely receive the attention to detail afforded to firearms, and that current control systems simply aren't conductive to realistic hack, slash and stabery.

"It's not a sword game if you have to pull a trigger or push a button to swing your sword," he says, shortly before hurling an Xbox 360 controller into a trashcan.

Described as "Guitar Hero with swords," Clang appears to be the kind of in-depth fencing game couch samurais have been dreaming off since motion controls started gaining popularity. Apparently, early versions of the game will use an "off the shelf" motion controller - from the video it appears to be a Razer Hydra. The Kickstarter is asking for $500,000, and has just passed the $150,000 mark.

"In the last couple of years, affordable new gear has come on the market that makes it possible to move, and control a sword fighter's actions, in a much more intuitive way than pulling a plastic trigger or pounding a key on a keyboard," reads the game's Kickstarter page. "So it's time to step back, dump the tired conventions that have grown up around trigger-based sword games, and build something that will enable players to inhabit the mind, body, and world of a real sword fighter."