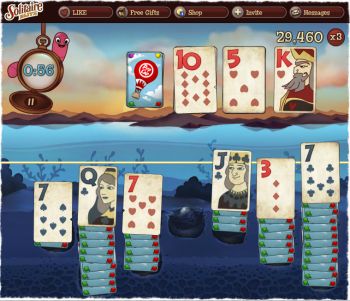 Solitaire Blitz is essentially Golf Solitaire - here's the Wikipedia entry if you're not familiar with it - "PopCap-ified" on Facebook with a timer, prizes, power-ups, cheevos and more. charity: water (and yes, it's all lower case) is a non-profit organization that works to bring clean drinking water to people in developing countries. Kathleen Henkel of New Jersey and Laura Rich of Cardiff, Wales, are two seriously hardcore Solitaire Blitz fans. And later this month, they're all coming together to do an epic, exhausting solid for charity.

Over June 26 and 27, Henkel and Rich will each attempt to play Solitaire Blitz for 30 consecutive hours, a terrible idea if there ever was one, in order to raise funds for charity: water. PopCap is leading the way, pledging to donate $167 per player per hour, which will add up to over $10,000 if they both make it to the finish line. A successful 30-hour run will also establish a new Guinness World Record for "Longest Videogames Marathon Playing a Card Game."

The 68-year-old Henkel, who has previously done charitable work in Africa, will settle in for her effort at a gallery on the ground floor of the Roger Smith Hotel in Manhattan, while Rich, a 31-year-old mother of three, will go to work at the Sea Life London Aquarium. In the run-up to the marathon, Henkel said she plans to log at least 60 hours of Solitaire Blitz over the next two weeks. "I'm really determined to reach the goal of 30 consecutive hours," she said. "Luckily the space is connected to a hotel - I'll be ordering lots of coffee!"

Players can support the cause by pledging as little as ten cents per hour, for one or both players, at the Solitaire Blitz Maraton Facebook page. The fun begins at 9 am EST on June 26.