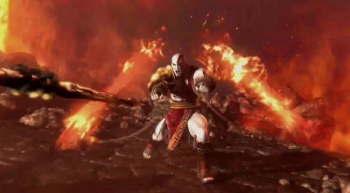 If you've played God of War, you can probably think of a lot of words for how it made you feel; chances are, "weak" is not one of them. Jason McDonald, one of God of War's lead combat designers, wants you to know that this is no accident. After working on one of the most iconic action series in modern gaming, McDonald has developed a few key ideas about how combat should work. The main character, he argues, should move and fight in a way fitting his personality, and the player should feel tough and well-informed in the protagonist's skin. In the case of Kratos, McDonald wanted players to feel like they were controlling a brutish warrior, but a very responsive one.

"For Kratos, it's always very simple," says McDonald. "We want to make the guy feel powerful. We want to make you feel good, as a player, using him." One of McDonald's biggest concerns is making sure that the character's move set matches his demeanor and reinforces synchronicity between the real-world gamer and his or her onscreen avatar. "We don't want him doing backflips and doing crazy like ninja-like moves, but things that fit his character, things that fit his power, and make you feel connected to the guy."

McDonald also believes that everyone who picks up a God of War game should be able to triumph with a little perseverance. "I'm not going to lie; we do get knocked occasionally for being a little too accessible, a little too easy and straightforward," he admits. "Our game is not designed to be one that is going to make you cry [and] beat you over the head ... [We've] got to make sure that things aren't too painful or too hard, but there's enough there with your different abilities, different items, different things that you can use for yourself, different moves, and different specials." While God of War fans can attest that the game has a fair amount of depth, between Kratos's various combos, weapons, and magical spells, McDonald wants that depth to be there for people who want it, not to get in the way of less skilled players.

In spite of this, McDonald predicts that more strategic, exacting gameplay styles will probably be necessary to stay competitive in the upcoming God of War: Ascension's multiplayer. "[You're] going to have to pretty much know your character a little bit better in order to know how to counter, when to counter, and what to counter with." Still, it's good to know that while action gaming will likely always have a place for the gamer who wants to utilize every tool in the box, the rest of us can get by with a smart, strategic application of the Square and Triangle buttons.