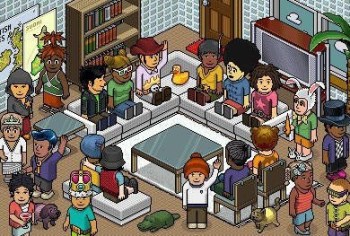 A new report about pedophiles on Habbo is costing the game one of its biggest investors.

In operation since 2000, Habbo, formerly known as Habbo Hotel, is a social network/MMO aimed at young teenagers that draws in more than nine million unique visitors every month. But for all its success and popularity, it's also been saddled with a very unsavory reputation as a haven for pedophiles. The latest report, by U.K.-based Channel 4 News, claims that its reporter was confronted with "chats and interactions of an explicit sexual nature" each and every time she played the game, 50 times in total spread out over two months.

The claims are nothing new - The Escapist ran an article, "Will Bobba For Furni," that touched on the topic all the way back in 2007 - but this latest report suggests that the situation is far worse than previously suggested and completely out of control. "The chat was very sexual, perverse, violent, pornographic, overtly sexual acts, people saying they were going to do things to others, and it was very graphic," said producer Rachel Seifert. "Within two minutes I was being asked individually, 'Do you have a webcam?', 'Can we chat on MSN, on Skype?' I was also within a couple of minutes asked to strip, fully naked, and asked what would I do on a webcam."

In response, Paul LaFontaine, CEO of Habbo studio Sulake, released a statement saying that the company does everything it can to ensure the safety of its users. The company employs more than 225 moderators who track 70 million "lines of conversation" around the clock, and also works with child safety organizations and local police forces to "address inappropriate behavior."

"Habbo's leading safety systems were recognized as making the service one of the safest social networks in a 2011 European Commission report. Last year we were also awarded the commendation of 'Safer by Design' from the Child Exploitation and Online Protection Centre (CEOP)," he wrote. "Through a combination of active moderation and user empowerment, we remain confident that we can continue to deliver the opportunity for our users to engage and communicate in a free but responsible manner."

In spite of those reassurances, investors are apparently growing uneasy with their association with the game. Balderton Capital, which currently holds a 13 percent interest in Sulake and is the company's second-largest shareholder, is expected to sell its holding and resign from the board of directors in the wake of the report.

"We were given some information a week ago that profoundly shocked us. We had to ask ourselves whether we were comfortable being investors in a business where children were not being adequately protected," a Balderton rep said. "We didn't take this decision lightly, as we have been investors in Sulake for over eight years, but the standards required to run a website that children have access to are very high. We felt the company was not meeting those standards."