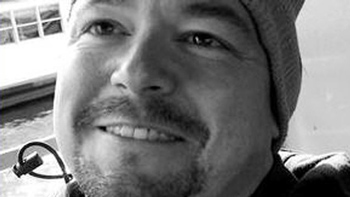 A hitchhiker who was shot in the arm by a passing driver just happened to be researching a memoir called "The Kindness of America."

Ray Dolin, whose work can be seen on his website called - oh dear - One Shot Impressions, was hitchhiking across Montana as research for his latest project, The Kindness of America. Dolin was just west of the town of Glasgow when he held out his thumb to a passing pickup truck. Unfortunately, the alleged driver, one Lloyd Danielson, wasn't in a very kind mood, as instead of stopping, he leaned out of his truck window and shot Dolin in the arm.

Dolin managed to flag down a second car with his remaining arm, and the driver promptly contacted the authorities. A manhunt ensued and Danielson was arrested after he stopped to ask a local farmer for directions. He faces charges of felony assault with a weapon and driving under the influence. He declined to enter a plea when he appeared in court yesterday.

"It appears to be a random shooting. We don't know exactly what caused him to do it. He just drove up and shot him," said Valley County Sheriff, Glen Meier.

"We're still the wonderful people in Montana we've always been, and we'll get through this."

Hopefully, so will Dolin. He's currently recovering and isn't taking calls from the press. Thankfully, the internet is always on hand to offer its best-wishes and a selection of glib wisecracks.

"You should really add a 'C' to your website's name now," quipped a commenter on Dolin's guestbook.