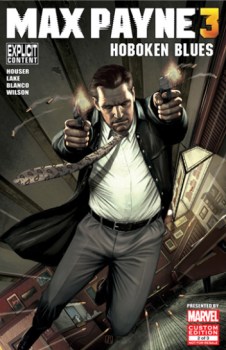 It ain't easy being Max Payne. Just check out Max Payne 3: Hoboken Blues if you don't believe me. After what was by all appearances a pretty miserable childhood, Max finally discovered his talent - violence - and then, even better, the incomparable happiness that comes from true love and fatherhood. That lasted about a couple of years, after which it all fell apart, when his family, and then a few years later his partner and best friend, were massacred by a bunch of Valkyr-sucking scumbags. In the wake of the events of Max Payne 2, presciently subtitled The Fall of Max Payne, he was forced to retire from the NYPD and was left a broken, brooding alcoholic, "drinking himself dumb in near-poverty in Hoboken."

Hoboken Blues covers a lot of post-Max Payne 2 backstory, none of which I will spoil here, and while there's no straight-up retconning at work (at least none that I noticed), I still maintain that the comic serves up a decidedly more wretched Max Payne than that of the first two games. Rather than just a normal guy having an extended run of bad luck, the Max in the comics is positively star-crossed and born to violence.

Still, it's free, it fills in a lot of the pre-Max Payne 3 blanks and, personal bias toward my beloved Max Payne franchise notwithstanding, it's pretty good. The digital edition of the Max Payne 3: Hoboken Blues is up now at rockstargames.com, or you're a serious fan and live within reasonable proximity to a decent comic shop, you can try your luck at scoring one of the limited print editions.