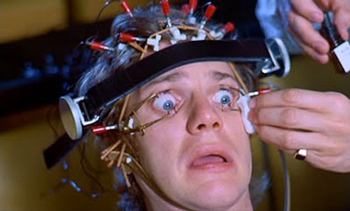 The ultra-violence has to stop," he told GameIndustryBiz. "We have to stop loving it. I just don't believe in the effects argument at all, but I do believe that we are fetishizing violence, and now in some cases actually combining it with an adolescent approach to sexuality. I just think it's in bad taste. Ultimately I think it will cause us trouble."

The industry's fondness for increasingly realistic depictions of violence is a hot topic at the moment. Both Crystal Dynamics and Spector's former employer, Eidos, have been heavily criticized for mixing sex and violence in their trailers for Tomb Raider and Hitman: Absolution. Neither trailers have been well received, and the latter doesn't seem to have impressed Spector in the slightest.

"I left Eidos in 2004 because I looked around at E3 and saw the new Hitman game where you get to kill with a meat hook, and 25 to Life, the game about kids killing cops, and Crash & Burn the racing game where the idea is to create the fieriest, most amazing explosions, not to win the race... I looked around my own booth and realized I just had one of those 'which thing is not like the other' moments," he said. "I thought it was bad then, and now I think it's just beyond bad."

Violence has always been gaming's go-to mechanic, and Spector is certainly no stranger to it, having included it in most of his games to date. While Epic Mickey was light on the decapitations on account of it being a Disney game, System Shock 2 and Deus Ex didn't skimp on the claret (though it's worth noting that Deus Ex was one of the first games to give players a choice between lethal and non-lethal weapons). Spector argues that the violence in his games was meant to make players uncomfortable, while modern games present even more gruesome content without any context or consequence.

"We've gone too far," he said. "The slow-motion blood spurts, the impalement by deadly assassins, the knives, shoulders, elbows to the throat. You know, Deus Ex had its moments of violence, but they were designed - whether they succeeded or not I can't say - but they were designed to make you uncomfortable, and I don't see that happening now. I think we're just appealing to an adolescent mindset and calling it mature. It's time to stop. I'm just glad I work for a company like Disney, where not only is that not something that's encouraged, you can't even do it, and I'm fine with it."

While I like severed limbs and exploding heads as much as the next mildly desensitized sociopath, it's hard to deny that Spector has a point. Videogames and violence have always been intertwined - its the simplest form of conflict to portray, after all. But while the technology behind gaming has matured, the portrayal of violent conflict most definitely hasn't, it's only grown less abstract.