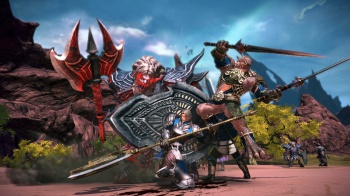 South Korean authorities are looking to stamp out the burgeoning game items-for-cash market.

According to The Korea Times, the Ministry of Culture Sports and Tourism is planning to introduce legislation which will render all commercial virtual item trades illegal. Under the new law, which will be announced next month, gamers caught trading items for cash (or vice versa) could face a maximum 50 million won fine (approximately US$42,848) and a not-unreasonable-at-all five year jail term.

"The main purpose of the games is for entertainment and should be used for academic and other good purposes," said Kim Kap-soo, head of the ministry's content policy division.

The law also prohibits MMO players from using programs that play games and collect items automatically. According to the ministry, items acquired by bots make up over 60 percent of all items traded in the country, and the monetization of item trades is partially responsible for the nation's rising crime rate amongst teenagers. If the finalized law doesn't feature any exemptions, it will likely cripple the country's MMO industry. An overwhelming majority of Korean MMOs are free-to-play titles which depend on virtual item sales to turn a profit.

Korean arcades will also be affected by the new law, as it closes the legal loopholes they've been using to bypass anti-gambling legislation. Currently, games like Sea Story don't technically count as gambling, as the machines don't pay out in cash. They do however, pay out virtual tokens which can then be redeemed for cash. The number of Arcades offering games like Sea Story has risen to 1,500 as of April this year compared to a mere 50 in 2009.